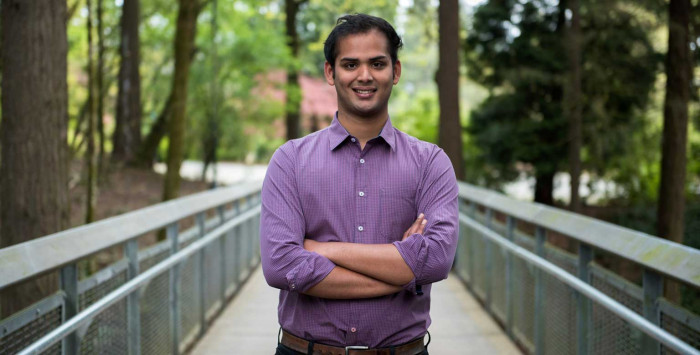 Yash Desai ’15 was the student speaker at the College of Arts and Sciences commencement on May 9. A committee of seniors, staff, and faculty selected Desai, an economics major from Pune, Maharashtra, India, during the annual Senior Speaker Competition. Yash attended Lewis & Clark as a Davis United World College Scholar.

We talked with Desai about his time at Lewis & Clark and the advice he’s offering to his fellow graduates.

What’s your favorite memory from your four years here?

It’s hard to narrow it down to just a moment or two, but I suspect I owe my happiest times at Lewis & Clark to the friends I’ve made here. Prior to college, I attended a boarding school in the middle of a 150-acre biodiversity reserve in rural India—and it’s difficult to find anything more tight-knit than that. But I’m proud to say that the relationships I’ve made here are far stronger than the ones that I made there, and have resulted in some of the happiest moments of my life.

What made you want to come to Lewis & Clark?

I was looking for a small, community-oriented liberal arts college in the U.S, and I got the chance to learn about Lewis & Clark in detail through its Office of International Students and Scholars (ISS). Those interactions were truly the deciding factor for me. ISS has continued to be an amazing resource throughout my Lewis & Clark experience.

How has your time here helped you grow as an individual?

I can barely remember the version of myself who moved here four years ago. I expected college to be transformative, but I didn’t realize just how much I’d grow. There are the obvious soft and hard skills you pick up along the way. But the real growth worth acknowledging is the kind that transformed me at my core. For instance, my time here has made me realize the extent of my privilege. As a first-year student, I was inclined to believe that I was in charge of my fate, and that my successes were simply a proportionate reward for my efforts. I don’t believe that anymore. I think, in reality, questions of opportunity are much more complicated.

What was your favorite class? How did it expand your knowledge?

Exploration and Discovery with Pauls Toutonghi, Introduction to International Affairs with Cyrus Partovi, Differential Equations with Paul Allen, Financial Systems with Eric Tymoigne, and Introduction to Entrepreneurship with Michael Kaplan and Brian Detweiler-Bedell are just some among many of my favorite courses. I would also give a special shout-out to both Introduction to Economics and Economics Senior Seminar with Cliff Bekar. In these classes I discovered that we are some the richest people ever to walk the planet, and I learned about the extent to which our conditions are determined by factors outside our individual control. Both of these courses made me much more aware of the privileges I enjoy and the role they have played in my life.

What message do you want to convey to your fellow graduates at commencement?

I hope to remind them that, while it is impossible to know what hand life will deal us next, we can take steps to be prepared to make the most of whatever comes.

What will you do after graduation?

After a short break, I plan to resume my job search in the Portland area. I’m also considering applying to graduate programs.