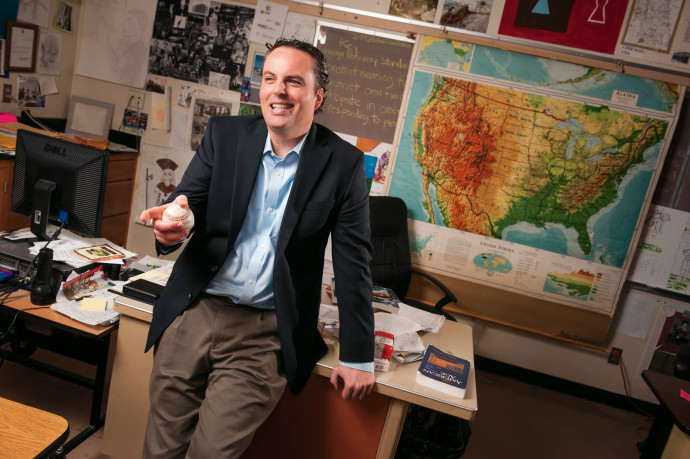 The students in Gresham High’s International Baccalaureate Social Studies class break into groups to discuss the day’s reading assignment: the first chapter of The Communist Manifesto.

“Some people say you can’t teach The Communist Manifesto to high school juniors,” says Michael Lindblad M.A.T. ’96. “They think the vocabulary is too big. For me, I’m more interested in how students engage with the work.”

At the blackboard, volunteers compose their questions. Then Lindblad assumes the role of facilitator—reading questions aloud, inviting responses, making sure as many students as possible lend their voices to the conversation. It looks less like teaching and more like a community forum.

All good teachers have a method. The great ones continue to hone their methods. They reflect, critique themselves, evolve as times and students change. It’s similar to how a baseball pitcher balances his attention between caring for his arm, studying hitters, and constantly adjusting. The analogy is apt here: Michael Lindblad is the pitching coach for Gresham High’s baseball team. He’s also Oregon’s 2015 Teacher of the Year, the 13th Lewis & Clark alumnus to receive this high honor.

You always have to find new ways to engage with students,” he says. “As teachers, we need to move around, say things students don’t expect. It’s much different than putting a worksheet in front of them.”

Being able to consistently engage with large, multicultural classes is a skill Lindblad first learned as an M.A.T. student in Lewis & Clark’s Graduate School of Education and Counseling.

“Professor Vern Jones taught a course on classroom management,” Lindblad recalls. “I thought we’d talk about management. Dr. Jones’ focus was on movement and spatial arrangement. He modeled these concepts the entire time, from how the desks were arranged, to how he moved around the class.” (Jones retired at the end of 2014.)

Another professor emeritus, Zaher Wahab, was instrumental in framing Lindblad’s thoughts around equity and respect in the classroom. “Professor Wahab drove home how important equity is to Lewis & Clark’s mission. In our very first class on race and equity, he challenged everyone’s opinion, and effectively cracked our minds open.”

Finding new ways to engage is paramount when classes consist of 40 students from more than a dozen countries, as is the case during some of Lindblad’s classes. This level of diversity is actually one of the reasons Lindblad chose to teach at Gresham High.

“My first school was very homogenized,” he says. “Diversity and equity had been such a huge part of my education at Lewis & Clark, I started to wonder if I was doing everything I could to make a difference.”

Lindblad took time away and traveled to Peru in the hopes of immersing himself in a Spanish-speaking culture. “I intentionally went to places where no English was spoken,” he says.

When he returned to the States, he looked at Gresham’s growing Spanish-speaking population and saw an opportunity. “My first year, the school was 3 percent native Spanish speakers,” he says. “Today we’re at 28 percent.” Lindblad developed Gresham High’s International Baccalaureate history program with fellow alum Amanda Weber-Welch M.A.T. ’95, and then advocated for intensive outreach to recruit more students of color into the course.

He also developed an annual humanitarian project at Gresham High, which is designed to inspire and help students feel connected to real-world issues. Each year, his classes lead fundraising efforts to support a range of causes—from local shelters to international relief and education.

“The humanitarian project takes learning beyond the classroom,” he says. “Students go out into the community, and reach out far beyond the city limits. They see that when they engage with the world, they have the power to change things for the better.”