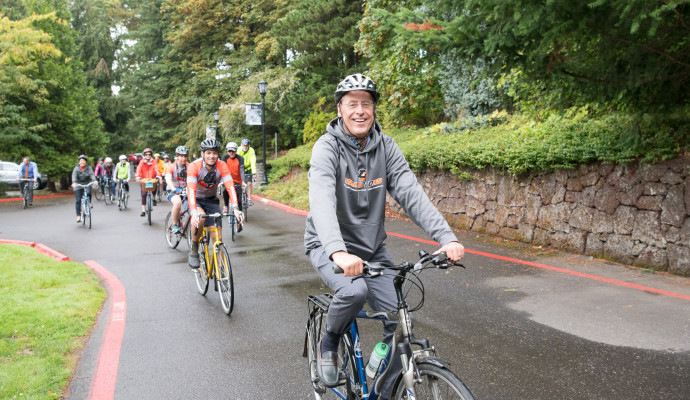 On Monday, October 2, President Wim Wiewel pedaled to campus for his first day in the office at Lewis & Clark. He was joined by a group of 20 faculty, staff, and students—many of them regular bike commuters—for the ride from the nearby presidential residence. After refueling, he spent much of the day visiting offices and meeting the campus community. Entertainment at an afternoon party included the music of the Freddy Vilches Trio—Freddy is associate professor of Hispanic studies and director of Latin America studies—and student a cappella group, Kith and Kin.

In his remarks at the party, President Wiewel said, “What I’ve discovered since being on campus and getting together with folks—students, faculty, staff, alumni—is the sense of high touch that marks this community: people truly caring about and taking care of each other and of this place. Every college says that, as part of recruiting students, they care about each other. But when you’re here, you see how real and genuine it is.”

Wim joins Lewis & Clark not only as president but also as the college’s newest Third Culture Kid. A US citizen and native of the Netherlands, Wim comes to Lewis & Clark most recently from Portland State University, where he strengthened teaching and research and advanced the university’s commitment to equity. He holds degrees in sociology and urban planning from the University of Amsterdam and a PhD in sociology from Northwestern University. He is a nationally recognized expert in urban planning and in the way institutions of higher education strengthen their home cities.

In the Netherlands, he received a classic liberal arts education and studied six languages—although he says his Greek and Latin are a bit rusty now. He was the first in his family to go to college. Wim is married to Alice Wiewel, Oregon’s state architect, and they have four children.

He recently sat down with our alumni magazine, the Chronicle, to talk about his journey to Lewis & Clark.

How did your experience as an exchange student shape your educational perspective?

I am an absolute true believer in the importance of global education. That’s something I share with the Lewis & Clark community. I think there’s nothing as valuable and as life changing as studying overseas—it certainly was for me. You learn about other cultures, but more importantly, you learn about your own culture and yourself by testing your values and beliefs against a new environment. Fun fact: today I like to prepare for travel by reading place-based fiction. Novels give you more of the underbelly of a place than guidebooks.

You’ve most recently served as president of a large urban university. What attracted you to Lewis & Clark?

The single most important reason, the one that will ultimately drive my work, is that I think the liberal arts are vitally important. They’ve always been important—and they will always be important—but they are particularly so in this time when people are questioning the very substance of science, truth, and free speech.

Lewis & Clark represents the classic model of a liberal arts education—a college in an idyllic setting, set off from the hubbub, allowing space for contemplation. For most of my career, I’ve been involved with urban universities, which is another model of education. What I find intriguing is pulling the two together—taking advantage of the connection to the city but still having the ability to step back from it.

What strengths do you see Lewis & Clark building on in the future?

Many people first come to know of the college because of its beauty. Other assets include our strong reputation for student-faculty interaction, our small classes, our strength in areas like environmental sustainability and international education, and our proximity to Portland. And, of course, we also have a well-respected law school and graduate school of education and counseling. Other colleges may have one or two of these strengths, but I think it’s the combination we have at Lewis & Clark that makes us unique.

What is your favorite music?

The Beatles, Simon and Garfunkel, Bob Dylan, and the Kinks. My wife thinks I’m hopelessly stuck in my youth! All-time most beautiful for me: Mozart’s Solemn vespers of the confessor, performed by Kiri Te Tewana. Surest to bring tears to my eyes: “Hallelujah” by Leonard Cohen.