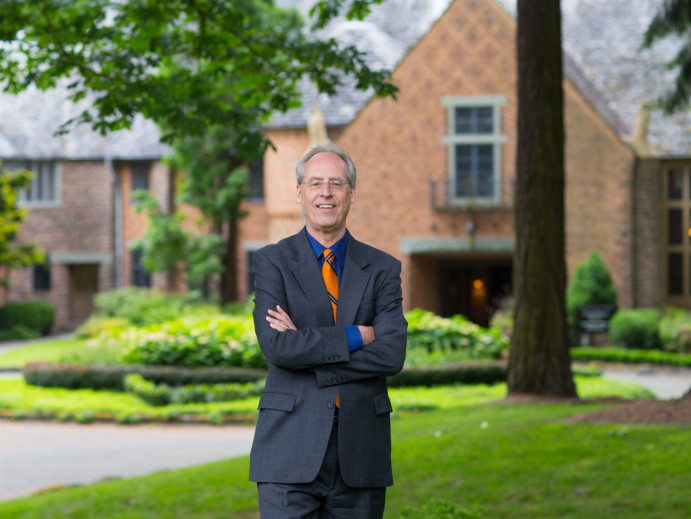 Wim Wiewel is Lewis & Clark’s 25th president. He took the helm in October 2017 after nine years leading Portland State University, and was inaugurated in October 2018. Since then Wiewel has completed a strategic planning process resulting in “Exploring for the Global Good,” which reaffirms Lewis & Clark’s role as a leading liberal arts college with outstanding professional schools; completed a facilities master plan; initiated a comprehensive campaign that has set new records in fundraising for Lewis & Clark; and launched a strategic enrollment management plan for the undergraduate college.

A recipient of a classic liberal arts education as a high school student in his native Amsterdam, Wiewel learned early on the value of a broad-based education rooted in critical thinking and analysis. The first in his family to go to college, he holds degrees in sociology and urban planning from the University of Amsterdam and a PhD in sociology from Northwestern University.

Wiewel is a proponent of strong civic engagement, which benefits both the college and the community it calls home. At Lewis & Clark, he has drawn from the community beyond campus to create advisory boards for entrepreneurship, sustainability, global engagement, and the Graduate School of Education and Counseling. He has served on a number of prominent educational, business, and cultural organizations, including Second Nature, AFS-USA, All Hands Raised, Regional Solutions, Portland Business Alliance, and the World Affairs Council of Oregon.

A vocal advocate of teaching and practicing sustainability, Wiewel works closely with civic, business, and academic leaders to drive collaboration. Wiewel received the 2012 inaugural Presidential Leadership Award from the U.S. Green Building Council’s Center for Green Schools and was given a Climate Leadership Award from national nonprofit Second Nature in 2013 for demonstrating innovative and advanced leadership in education related to sustainability and climate mitigation and adaptation.

A sociologist with a passion for strong cities, Wiewel has authored or edited nine books and more than 65 articles and chapters that have appeared in such publications as Economic Geography,Economic Development Quarterly, Urban and Metropolitan Universities, and the Journal of the American Planning Association. His most recent books are Global Universities and Urban Development and Suburban Sprawl.

Wim is married to the architect Alice Wiewel and together they have four children. Admirers of Portland’s eclectic cultural offerings and of Oregon’s amazing natural beauty, Wim and Alice take time to hike, camp, and explore the mountains, coasts, and deserts. They also attend lots of performances and games in town, and frequent community receptions and dinners.

The Campus as a City, Chronicle of Higher Education, October 14, 2019

Colleges Commit to Carbon Neutrality. Getting There is Hard, ClimateWire, October 3, 2019

Saving the Planet Hasn’t Persuaded Colleges to Divest From Fossil Fuels. Will Saving Money Do the Trick?, Chronicle of Higher Education, August 30, 2019

The Case for Liberal Arts Education in a Time of Crisis, The New Republic, May 27, 2020

Your City (or Town) is More Than a Place to Call Home, President2President, October 2019