VP (Usman Ally BA ’04) and Mace (Desmin Borges) in their wrestling personas of The Fundamentalist and Che Chavez Castro, from the production, The Elaborate Entrance of Chad Deity.In June, Theatre Journal, published by Johns Hopkins University Press in cooperation with the Association for Theatre in Higher Education, published an essay by Warren Kluber BA ’12. The essay was the first in a trifecta for Kluber: he also has articles in the current issues of The Journal of Dramatic Theory and Criticism, and PAJ: A Journal of Performance and Art.

We caught up with Kluber—now a PhD candidate at Columbia University—to hear about how Lewis & Clark shaped his trajectory.

Tell us a bit about where you grew up and what attracted you to Lewis & Clark.

I grew up in Eugene, Oregon. During high school, I probably spent more time in theatres than in classrooms—mostly acting, but also writing and directing a few plays. For some reason, I never considered that this might lead to a career. College and adulthood, I imagined, were for “serious” work; and what could be less serious than an institution based on make-believe?

I came to Lewis & Clark unsure of what I wanted to study, and flirted with majors in international affairs, political science, sociology and anthropology (SOAN), and French, before switching to English at the start of my junior year. My English classes challenged and engaged me most fully, both intellectually and emotionally, and I felt that what I learned in them was not just expanding what I knew, but also who I was. In the meantime, I had been acting in L&C theatre productions every semester, and had written a couple of plays that were produced in the Black Box Theatre—but I still considered theatre purely extracurricular: a place for playing around with friends.

You were an English major, but you were very active in the theatre department and their productions. What made you approach your studies in that way?

My theatre and academic work started to fuse the summer after my junior year, when I received the English Department’s Dixon Award, funding my travel and research project on oral traditions in West Africa. While making my way around Senegal and the Gambia to interview griots and listen to oral epics and folktales, I realized that (though billed as a literary project) what I was doing was performance analysis. Rather than trying to read an abstracted text, what fascinated me was everything that happened to give the stories meanings, associations, and emotional charges in excess of the archived transcripts I had read: The incantatory qualities of the griot’s voice, alternating a lulling melody with a piercing staccato. The group of older women in the audience providing running commentary on the action, like a Greek chorus. Even the occasional improvised asides that interpellated me into the performance, e.g., when the griot, telling a story about an outsider entering a community, would point to me as a visual approximation. Rather than this theatrical make-believe seeming escapist—separate from the serious concerns of the “real world”—I saw it for the first time as world-making.

Back on campus for my senior year, it occurred to me that what I had been focusing on and writing about in all of my courses was, essentially, theatre. Reading for my English classes, I wanted the feel of the words in my mouth and got it by muttering at volumes inaudible to my roommates. In SOAN, I was interested in how cultural myths and imagined structures became social fact through everyday performances—from ceremonial acts like reciting the pledge of allegiance, to self-presentational strategies like finding the right angle for the perfect selfie. Rather than being separate from other realms of interest, theatre seemed to me a connective fabric between them. 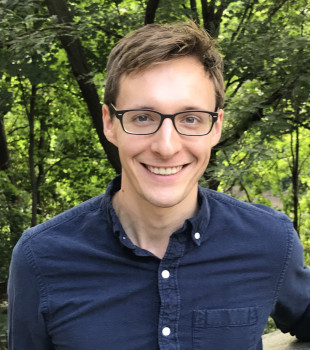 Were there any formative experiences, courses, or faculty at L&C that helped shape the path you took after graduating?

I had racked up enough performance credits that I was able to add a theatre minor by taking a couple of classes. And in the year after graduating, I decided to apply to theatre PhD programs. During this process, and in the years since, I’ve benefited from perspicacious and caring mentorship from L&C English and theatre faculty—especially Susan Kirschner, Associate Professor of Theatre Stephen Weeks, Professor of English Rishona Zimring, and Associate Professor of English Karen Gross. During my first year in New York, Rishona even sent two of her friends living in the city to check in on me and make sure I was ok. (I was.)

My current work in theatre studies hasa strong interdisciplinary bent, which I attribute in part to my explorations across academic departments at L&C. In my dissertation, “Theatre of Operations/Operating Theatre,” I traced the conceptual blending of war and medicine from WWI to the present day—culminating in “surgical strikes” executed by drones; “surgical operations” carried out by Special Ops commando units; and medically sanctioned torture perpetrated under the nom de guerre of “enhanced interrogation.” I use the tools of theatre analysis to demonstrate how these metaphorical associations are cemented through concrete acts of performance, such as the TV-broadcast of Saddam Hussein’s medical exam.

I argue that in the representation, planning, and enactment of modern war, medical metaphors mediate a paradoxical junction of cool technological distance and hot racist fervor: shifting focus between white American citizen-subject as “doctor,” and racial other as “disease.” And I study a century of artistic theatre work that stages this critique, while finding in medical metaphors imaginative grist for new theatrical strategies. For example, in Frances Ya-Chu Cowhig’s play Lidless, a former Guantanamo interrogator  is tracked down years later by a former Gitmo detainee, who contracted hepatitis and needs a new liver. The play is devised around the central metaphor of organ transplantation, which inspires non-realist experimentation with alternative ways of watching, knowing, and being moved.

What would people who know you now be surprised to know about you when you were a student at L&C?

At Lewis & Clark, Iperformed with the a capella group Section Line Drive. When I’ve mentioned this to some of my current students who sing a capella at Columbia, they 1) are stunned to realize that I was once in college too, and 2) go in frantic search of YouTube videos. Note of caution to future teachers: anything you do in college that ends up on the Internet, your future students will find it. They have online research skills that my generation cannot begin to fathom.

You were named a Pamplin Fellow. How did that shape your L&C experience?

In the Pamplin Society I got to know some wonderful L&C students and faculty in the sciences, whom I wouldn’t have met otherwise. It also allowed me to step back from the busy flow of coursework, and to think about the purpose and possibilities of the institution of which I was a part for four years. Projects and conversations with Pamplin Fellows brought me to realize what a utopian space colleges and universities are, where students and faculty from around the world come together to recognize, debate, and work through major problems creatively, collaboratively, and nonviolently. This, I think, played no small role in my eventual decision to stay in college forever.

[Fun fact: One of the actors featured in the theatre journal cover above is Lewis & Clark alumnus Usman Ally BA ’04. Ally is an award-winning stage and screen actor who has appeared most recently as the Hook-Handed Man in the Netflix series, Lemony Snicket’s A Series of Unfortunate Events, and HBO’s award-winning satirical series, Veep.)