An influential legal opinion published by the International Environmental Law Project could lead to the end of Japan’s high-seas sei whaling. 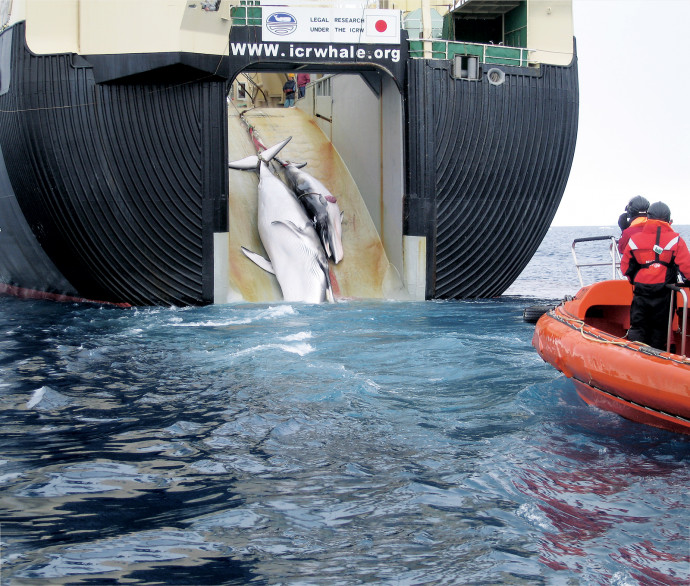 Minke whales, like sei whales, are targets of Japanese whaling. Here, two minke whales are dragged aboard the Nisshin Maru, a Japanese whaling vessel that is the world's only factory whaling ship. (Photo: Australian Customs and Border Protection Service/CC-BY-SA-3.0)

Stretching to 60 feet long and capable of swimming up to 35 miles per hour, sei whales are one of the largest and fastest mammals in the sea. They are also one of the most threatened.

Sei (pronounced SAY) whales have been off-limits to commercial fishing since the 1980s. But since 2002, Japan has killed more than 100 sei whales a year in international waters under a controversial “research program” conducted under the auspices of the International Convention for the Regulation of Whaling. Until now, Japan has managed to fend off repeated efforts by animal-rights activists, environmentalists, and other governments to halt the practice.

But Japan’s harvesting of sei whales may finally end this year, thanks in part to a convincing legal argument advanced by the International Environmental Law Project (IELP) at Lewis & Clark Law School.

IELP authored a 15,000-word legal opinion, initially published in 2017, detailing the ways in which Japan’s sei whaling practices violate a 43-year-old international agreement: the Convention on International Trade in Endangered Species of Wild Fauna and Flora (CITES). The agreement (which is pronounced SIGH-tees) lists sei whales among the species most at risk of extinction, which means they cannot be traded “for primarily commercial purposes” between countries—or, in this case, from international waters. But Japan has long claimed that its practices fall outside of this ban because it says it harvests whales for scientific research rather than for commercial purposes. 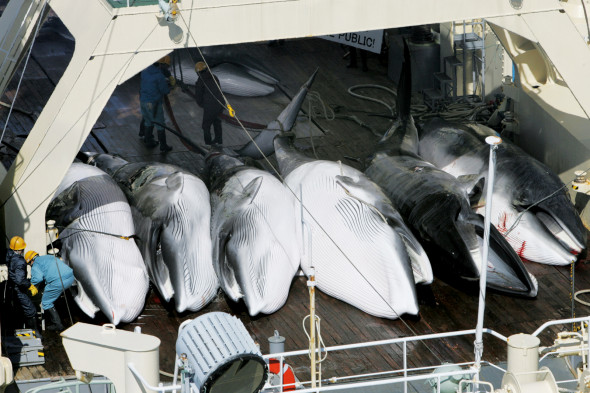 Japan does conduct scientific research on certain parts of the whale, such as its stomach and eye lenses, which it says helps better manage whale stocks. But in its legal brief, IELP argued that the “overwhelming majority” of each sei whale killed for scientific purposes is actually processed for commercial sale. In fact, meat is packed for distribution in retail-ready portions on the research vessel itself. It is sold to wholesalers for distribution to fishery cooperatives, groceries, restaurants, retailers—even school lunch programs. Those proceeds, in turn, finance further whaling.

The commercial-use argument helped convince the 90-member Standing Committee of CITES to issue a landmark ruling last October. For the first time, it determined that Japan’s sei whaling was “for commercial purposes and therefore not in compliance with the Convention.”

IELP’s legal opinion offered “a fresh perspective” on a long-contentious issue, says Matt Collis, the London-based policy director for the International Fund for Animal Welfare. “It is notable that the Standing Committee decision and the Secretariat’s lines of argument and recommendations seemed to largely correspond to the rationale and approach in the IELP opinion,” he says. “I think that demonstrates the importance and influence of IELP’s work.”

Erica Lyman, clinical professor of law at Lewis & Clark and lead author of the opinion, says the success of IELP’s argument came from focusing not on the legality of Japanese whaling, but on the narrower question of what happens to the whale after it’s killed.

“We weren’t challenging the whaling itself, we were targeting the introduction of sei whale meat and blubber that’s consumed in Japan from the high seas,” Lyman explains. “Previously, the argument was that the whaling was commercial. We took all the facts we could find and we built the argument around this idea that the use was commercial.” A Ripple Effect for Japanese Whaling Lyman says the recent CITES decision impacts Japan’s whale-hunting efforts beyond the sei.

As a result of the CITES decision, Japan is likely to stop hunting whales in international waters to avoid losing access to lucrative CITES-managed markets such as tropical timber, furs, and leathers. Japan also announced in December that it would withdraw from the International Whaling Commission, under whose auspices Japan had conducted purported “scientific whaling” expeditions targeting the sei.

In announcing its withdrawal from the commission, Japan said it will resume commercial whaling, but only in its territorial waters and exclusive economic zone. Such a shift reduces the threat to endangered whales, including the sei, which are typically observed far from coastlines.

“We went out and framed a legal analysis very differently than how this issue had been framed in the past,” Lyman says. “One of the supposed truisms of international law is that it’s unenforceable. But this case is an example of how it can work effectively.”

Dan Sadowsky is a filmmaker and writer based in Portland.

Olivier Jamin JD ’17, LLM ’18, of France, worked on the project first as a law student and later as an IELP Fellow. He worked with Lyman to craft the argument that Japan had been “introducing from the sea” prepackaged sei whale meat rather than sei whale bodies, as Japan had been claiming in official CITES records. He also attended a weeklong CITES meeting in Geneva in late 2017, where part of his role was to help explain IELP’s legal opinion to representatives from Francophone Africa.

“IELP has built a strong reputation among the CITES community,” he says. “A lot of people turned to us for advice and relied on us to answer quickly questions that came up during the week.”

Christina Collier JD ’19, who studied Japanese in college, worked with Lyman and colleagues in Japan to understand the financing of Japanese whaling. She reviewed Ministry of Agriculture, Forestry, and Fisheries records accessed through Japan’s open-records laws. Some of the information she gathered made its way into the final legal opinion, as well as several supporting documents, Lyman says.

Collier says she “really enjoyed” the work, which helped stoke her interest in international law. “It’s amazing that they allow students to do work that sometimes ends up before standing committees,” she says.

“IELP’s model has always included integrating students into its work,” says Professor of Law Chris Wold, the project’s founder and director. “They function much like junior associates in a law firm.”