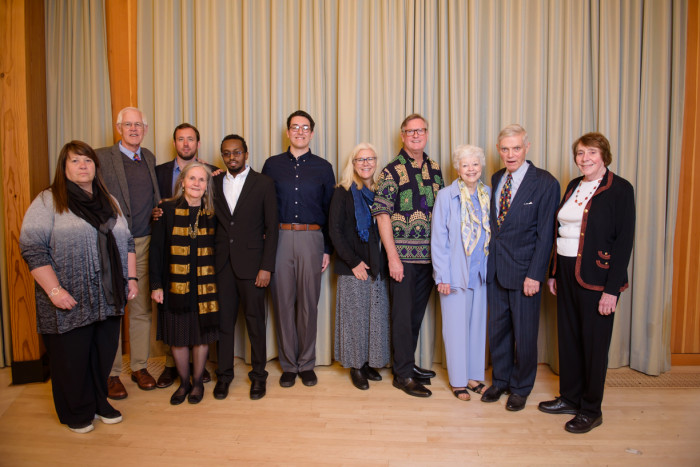 Every year, Kwibuka asks the world to come together, support survivors, and ensure that events like the Rwandan genocide never happen again. This year focuses on Rwanda’s story of understanding, rebuilding, and growth.

On Sunday, April 14, Lewis & Clark marked Kwibuka 25 with remarks by students and visiting dignitaries, a Rwandan-themed menu in Fields Dining Hall, and a candlelight vigil to remember those killed during the genocide’s three-month period.

Dallaire Scholar Fabrice Sibomana was among the commemoration's speakers at Kwibuka 25.The student speakers—Liza Clairagneau BA ’21, Davis United World College Scholar from Rwanda; Ocean Eale BA ’19 from Kahuku, Hawai‘i; and Fabrice Sibomana, L&C Dallaire Scholar and survivor of the genocide—talked about their own experiences, including attending the 25th Kwibuka in Washington, D.C. earlier this month. That trip was made possible by a grant from the Student Academic Affairs Board (SAAB).

In addition to the students’ remarks, attendees also heard remarks from former Ambassador to Guinea Joyce Leader, who served as deputy to the U.S. ambassador in Rwanda during the genocide. During her 21-year career, she has represented the U.S. in attempts to resolve threats to peace and human rights in Central Africa. She was joined by two additional dignitaries at the event: David Rawson, U.S. ambassador to Rwanda from 1993–96 and current visiting scholar in the Graduate School of Business at George Fox University; and Niels Marquardt BA ’75, Lewis & Clark’s inaugural diplomat in residence. Both Leader and Rawson were serving in Rwanda before the genocide and were responsible for the evacuation of Americans to Burundi.

The commemoration was free and open to the public.