First TEDx Event Asks Audience to Deconstruct What They Know 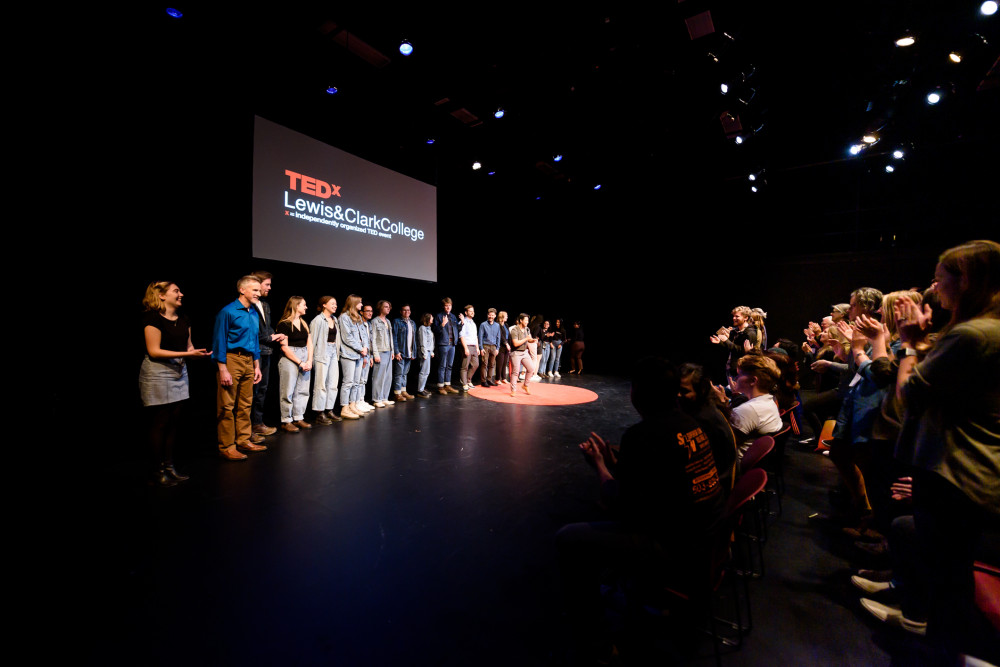 The beauty of the liberal arts experience, for many, is the emphasis on dialogue—asking questions, challenging ideas, and utilizing small classroom sizes to critically engage with personal views. The goal of the TED foundation (an acronym for technology, entertainment, and design) is largely the same, making Lewis & Clark a fit for a TEDx event. On Wednesday, October 9, students, faculty, and members of the Portland community gathered at the Fir Acres Theatre to watch the school’s first TEDxLewis&ClarkCollege, organized entirely by students and sponsored by the Bates Center for Entrepreneurship and Leadership.

The theme of the night was “deconstruction,” with speakers asking the audience to rethink the biases and preconceptions that shape our world. Topics ranged from the neurotypical ways in which we form connections to how music and relationships operate in tandem, alongside performances from college a capella group Section Line Drive and Latroy Robinson BA ’18.

(Click here to view videos of each of the talks.)

Amaris Bouchard BA’20 takes the TEDxLewisandClarkCollege stage.First to present was Amaris Bouchard BA ’20, a sociology and anthropology major whose topic was no small undertaking: the deconstruction of power. Bouchard saw flyers for the event around campus last spring and, with the encouragement of some friends, decided to audition and speak to her experience on the East Africa Overseas Program. The program gives students the opportunity to travel to different parts of northeastern Tanzania and study the Swahili language, as well as contemporary issues in urban and coastal East Africa.

For Bouchard, overseas programs were a key factor in her decision to attend Lewis & Clark, and the trip was life changing.

“A lot of people don’t think about going to Tanzania as a study abroad destination, and I think that partially played into why I wanted to go,” she said. “I was really curious about that—why is it that that’s not the normal thing, but drinking wine in Italy is super normal?”

In her presentation, Bouchard used personal anecdotes and self-reflection to discuss the legacy of colonialism and the complicated dynamics at play as an American student studying in an African country. “It was very emotional,” she said. “I had to do a lot of unpacking of what it meant for myself and others. The process hasn’t ended, it’s still something I’m going to be working with and thinking about for the rest of my life.” 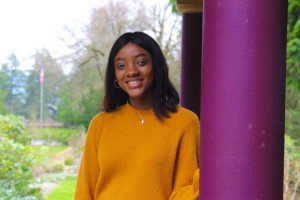 Tuse Mahenya, lead organizer and producer of TEDxLewisandClarkCollege.For lead organizer Tuse Mahenya BA ’21, the end of the experience was bittersweet. “It’s funny, the feeling of being done didn’t set in until days after the event,” she said. “It’s a blurry mixture of sadness, pride, joy, and gratitude. I almost want to do it all again—but better.”

Both Bouchard and Mahenya were impressed with the level of audience engagement in such a small space. “It was much more than I had hoped for,” said Mahenya. “Having been to a larger TEDx event in the past, where the audience was fully immersed in a conversation with the speaker and their talk, I underestimated our L&C community and their ability to dive into that same energy. I was beaming from behind the curtain the entire time.”

As one of Lewis & Clark’s international students, Mahenya said the theme of deconstruction also had personal significance. Originally from Tanzania, she was surprised to find that much of American learning was constrained by boundaries—who can stay in or stay out, who is allowed to speak on which issues. To deconstruct is to turn this framework on its head, and that, she believes, is the purpose of a TED talk: “We let them provoke us and challenge us, and at the end of the day, we may or may not believe what we’re being told. But at least we give the speaker the chance to be heard.”

Young alumnus LaTroy Robinson BA ’18 performing on stage at TEDxLewisandClarkCollege.As of yet, there is no confirmation of a future TEDx event on campus, but Mahenya hopes that the success of the first will encourage students to think about their own stories and what they have to say to the world.

“I think TED’s motto, ‘ideas worth spreading,’ is the epitome of the liberal arts experience: multifaceted, collaborative, driven by passion and the pursuit of knowledge,” she said. “I hope that in continuing the legacy, if nothing else remains, L&C students know that their stories need to be heard.”