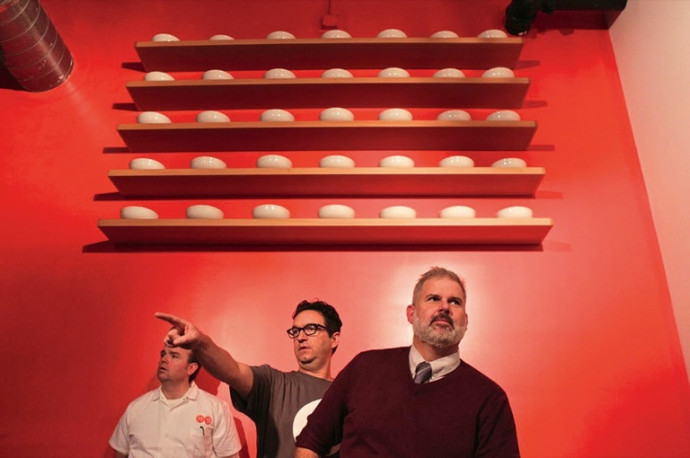 It’s lunchtime in Portland’s central east-side industrial district. Enticed by the aroma of slow-cooked meats, fresh vegetables, and handmade noodles, hungry diners step up to Boke Bowl’s counter to place their orders. Their selections are served up hot, fresh, and fast at communal tables in a modern urban setting.

Boke Bowl’s signature ramen noodles are handmade each morning by chef Patrick Fleming. Arriving by 7:30 a.m., he rolls out dough for up to 250 bowls of ramen and slices it into sheets, passing them through a pasta cutter before gently hanging the noodles up to dry. Fleming then starts simmering a number of fresh stocks called dashi: slow-cooked pulled pork, seafood miso with olive oil–poached shrimp, duck with duck confit, and caramelized fennel with Japanese eggplant.

“Everything is made in house daily except our gluten-free vegan yam noodles, which we buy fresh from a local company,” says Fleming. “The process is enormously labor intensive. We’re fortunate to have a dedicated crew.”

“During middle school, I lived in New Orleans with my family,” he says. “I learned to love one-pot meals like gumbo, jambalaya, and crawfish étouffée.”

At Lewis & Clark, Fleming was a biology major who fell in love with art. He channeled his creativity into cooking and attended the California Culinary Institute in San Francisco. After more than five years as a chef in Portland, he landed a job at the Oregon Golf Club in West Linn, where he began experimenting with diverse cooking styles and cuisines.

Sensing the time was right to venture out on his own, he called Riceci, whom he knew from college, to taste his ramen dishes and to consider partnering with him to open a restaurant. They also contacted fellow alum Tim Parsons, whom they knew had many contacts in Portland’s restaurant scene, to help promote and launch Boke Bowl.

“We had to start out slowly and build a following,” says Riceci, a former pilot and aircraft manager with a penchant for problem solving. “We couldn’t immediately afford to quit our jobs.”

Boke Bowl began as a pop-up restaurant, taking over established restaurants during the hours they were closed for business. Working off a negotiated profit split, they gained a following for their own cuisine and introduced the “borrowed” restaurants to a new clientele.

Social media was the mainstay of Boke Bowl’s marketing campaign during its pop-up phase. Fleming had an established audience for his blog, the Culinary Addict (the name refers both to his passion for food and his recovery from substance abuse). He was also adept on Twitter, while Parsons focused on Facebook. Together, they created an online buzz, hosting monthly dinner parties and revealing each new pop-up location only a week in advance.

“Because of social media, the 20- to 30-something crowd was initially a big part of our clientele,” says Riceci. “During the holiday season, they felt comfortable bringing in their parents. We knew then that we’d struck a good balance—by not being too cool to be accessible.”

Humbled by their success, Fleming and Riceci remind themselves to pause and enjoy the fruits of their labor, to find equilibrium between a blossoming business and fulfilling personal lives.

Yet visions for the future of Boke Bowl continue bubbling to the surface. They are entertaining thoughts of expanding their brand, of possibly branching out with stand-alone Boke Buns shops, Boke Bird chicken dinners, and Boke Bites catering.

Parsons is particularly focused on establishing copromotions with other restaurants and nonprofits, like Taste of the Nation in May, which benefited Oregon food banks and other hunger initiatives.

His consulting firm, Silent Partner Pdx, specializes in photography, event production, and social media management. He once ran the Rusty Nail on campus and, for a decade, managed restaurants in New York.

Promoting Boke Bowl as a place to host private parties and events is another of Parson’s priorities. And in the spirit of giving back, he’s reaching out to up-and-coming chefs, offering the restaurant as a pop-up space.

“I see Portland as a foodie amusement park,” says Parsons. “Each restaurant is like one of the rides, one of the roller coasters. The better we all are, the more the park benefits.”