Nestled in a rustic campground at the Omega Institute for Holistic Studies in New York state, Susan Kirtley fiddled with her tape recorder. The hot, still air seemed to magnify her nervousness as she sat down to interview noted comic artist Lynda Barry. 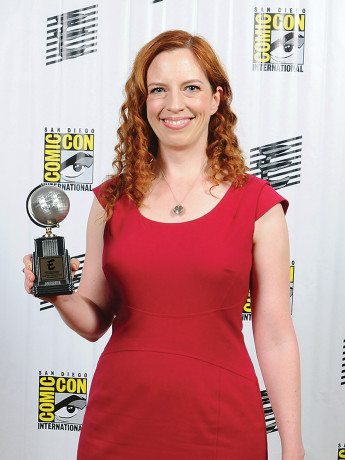 Susan Kirtley BA ’95“She grants very few interviews,” says Kirtley, who, in 2006, was chronicling Barry’s work. “I was uneasy, and she was cautious. The process quickly morphed into a give-and-take conversation about our lives and our work. I knew I was home free when Lynda looked over at me and said ‘You’re all right.’”

Kirtley is an assistant professor of English, director of writing, and coordinator of writing intensive courses at Portland State University. In July, she won the prestigious 2013 Will Eisner Comic Industry Award at Comic Con in San Diego. Her book Lynda Barry: Girlhood Through the Looking Glass earned top honors in the educational/academic work category. It’s the first full-length critical book about Barry’s work.

Barry, perhaps best known for her long-running cult favorite Ernie Pook’s Comeek, challenges the romantic “sugar-and-spice” ideal of girls on the verge of adulthood. She also explores representations of girlhood through novels, plays, essays, and articles.

Kirtley says the book was born through “a lucky set of circumstances.” In 2006, she decided to teach a college memoir class that examined Barry’s book One Hundred Demons. She then presented at an academic conference in Atlanta, where she caught the attention of an editor for the Great Comics Artists Series at University Press of Mississippi. “He encouraged me to submit a proposal and then write the book,” says Kirtley. “It was wonderful, exhilarating, and, at times, overwhelming.”

A stickler for detail, she delved into the study of visual rhetoric, drama, art history, and American studies. “I’m extremely organized and disciplined and I work very hard,” says Kirtley. “When it comes to dogged determination, I have it in spades.”

She hopes her book becomes a “conversation starter,” prompting more research into Barry’s work. Kirtley’s success and a surplus of unanswered questions have lead to her next project: a book that will highlight other female comic artists.

Kirtley majored in English at Lewis & Clark. “It was a great place for me to start out—the small classes and extensive interaction helped ground me,” she says. She went on to earn a master’s degree and doctorate in English with a specialty in rhetoric.

She had secured a college faculty position in Massachusetts when she learned of an opening at Portland State and jumped at the chance to return home. “I love living in Southwest Portland with my husband and two young children. It feels like I never left,” she says.

Kirtley carries her natural enthusiasm into the classroom, where she develops students’ writing and teaching skills—focusing on composition and rhetoric, writing and technology, visual rhetoric, comic art and graphic narratives, and women writers.

“There’s not a lot of me standing up and lecturing in my classroom. We’re very active—brainstorming ideas and doing hands-on projects together,” she says. “Teaching visual rhetoric is important because it blends the traditions of Socrates and Aristotle with today’s technological culture. It’s important for us as consumers, readers, and writers to understand how visual images communicate and enhance the written word.”