(Ed. note: This is an update to the story below, which originally appeared in November 2017.)

Due to the success of stage one of Project Kampungku, Ary Hashim BA ’20 has received an additional Lewis & Clark Renewable Energy Fee Fund (REFF) grant and funding from Veritas Design Group and Haskell to implement stage two of his project. He returned to Malaysia this past summer to double the number of lights and solar panels, and expand to an additional village in the area. He used the information he gathered from the first project to improve the design and implementation of the additional units.

Ary Hashim BA ’20 and members of the project team with equipment from the first solar installation.“We are happy to report that the equipment from last year’s project is still functioning,” commented Hashim. “This year’s equipment is more powerful and robust and should be able to withstand the Malaysian elements even better than last year’s hardware.”

Hashim gained experience working on both the technical and logistical aspects of developing a renewable energy project. In development of the original idea, Hashim sought advice from Assistant Professor of Economics Aine McCarthy, and worked closely with the Sustainability Office to further his goals of bringing renewable energy to Malaysian indigenous communities.

Ary Hashim BA '20 aside the completed solar farm.“I would like to give a shout out to the magnificent Amy Dvorak, Lewis & Clark’s sustainability director, for helping me piece my ideas together and turning my dreams of renewable energy into a beautiful reality,” continued Hashim.

He hopes to continue developing renewable energy sources that can be exported to anywhere in the world, and combine his knowledge on economic development with a commitment to utilizing sustainable practices.

Nov. 21, 2017 – Following in the Lewis & Clark tradition of environmental responsibility, Ary Hashim BA ’20 spent the past summer turning his dream of expanding Malaysian solar energy into reality with Project Kampung Ku. The project took hold after applying for a Renewable Energy Fee Fund.

The REFF provides grants to Lewis & Clark students from the surplus funding of the college’s voluntary Renewable Energy Fee. Students can apply for grants, once per year and up to three times during their Lewis & Clark tenure, with a proposed project or initiative that supports and promotes renewable energy. The projects are expected to benefit and support the educational mission of the students who support the fund.

“Project Kampung Ku (which means “My Village”) all started with a dream,” says Hashim. “While I was doing turtle conservation work off the coast of Malaysia on Lang Tengah Island I saw that they had this amazing renewable energy system in place. From the lights to the ovens, all electricity was solar power with no additional or high sunk costs. The people pay for the equipment, but it’s very well maintained and durable. I saw this and thought, ‘I want to do something like this for my indigenous people back in the mainland.’”

Hashim was born and raised in Malaysia, and came to the United States as an undergraduate student at Lewis & Clark College. Although he was initially drawn to the strength of L&C’s economics department, Hashim’s appreciation for the environmentally friendly and beautiful campus cemented his decision to attend. “I got the offer in the mail and knew this was the place to be.”

Hashim believes the college’s environmental consciousness directly impacts its student population. “The passion and the enthusiasm are here,” Hashim says of environmental activism at Lewis & Clark, citing the work of recent graduate Valcourt Honore BA ’17 and senior Kori Groenveld BA ’18. “That’s what inspires me to do these things—I see something I’m intrigued by and then I want to then go out and do it myself.” 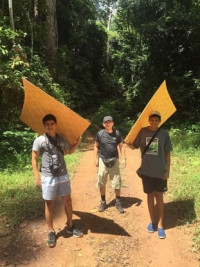 When Hashim received a REFF grant, the project began to take shape. Hashim’s uncle, an environmentalist, travelled to Kampung Dedari and conducted the preliminary fieldwork to pinpoint which services were most needed and where. “The locals have been deprived and their homes have been destroyed,” Hashim explains. “Their land is being encroached upon and used for development, but they’re trying to modernize at the same time. This project is meant to be the other side of that coin because we’re here to ask them what they need of us. It’s a symbiotic relationship.”

The information that came back to Hashim and his uncle echoed his time on Lankayan Island: the greatest need was light. Armed with a $4,500 REFF grant, Hashim traveled to Kampung Dedari in August for the five-day solar power installation process. Today, he receives a monthly assessment report on the health of the material and how it is being used.

For Hashim, environmental activism complements his prospective degree in economics. “It all comes down to economic development that looks into empowerment and breaking out of the poverty cycle, but with the environment at its forefront.”

The future of the project may not be decided as of yet, but the possibilities are endless. “I’m already thinking of how we can expand, like going to two villages with a ten thousand dollar grant. I can’t tell you if this will lead to a career in the future, but I’m hoping to do work in economic development and this has been a great introduction.”