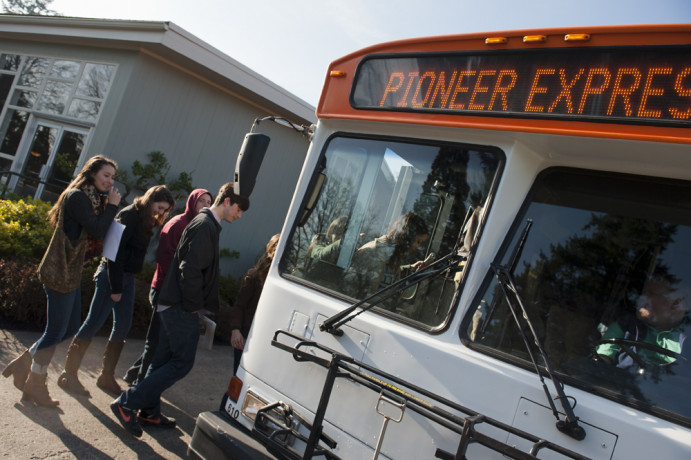 Lewis & Clark College has free shuttle services designed to help students, staff, and faculty travel between campus, downtown, and connect to other public transportation options. Airport shuttle service is offered at the start and end of semesters, and during Thanksgiving and spring break.

****Alert - SW Bond & Lowell shuttle stop has been temporarily moved to TriMet stop ID 13185. This is on SW Macadam, directly below the base of the Portland aerial tram.

For any concerns, lost items, or scheduling inquiries please call EcoShuttle directly at 503-548-4480. For additional information on shuttle routes follow @PioExpress on Twitter!

About the SW Broadway and Hall stop near Shattuck Hall at PSU stop:

The SW Broadway and Hall stop near Shattuck Hall at PSU is the main downtown stop for the Pioneer Express. This location has several advantages:

About the Macadam/South Waterfront stops:

If Lewis & Clark is delayed or cancelled due to inclement weather, scheduled shuttle service will be adjusted accordingly. Please refer to the online schedule and/or the shuttle tracker or the website in the event of inclement weather.

Lewis & Clark operates a shuttle to and from the Portland International Airport. To access:

The Airport Shuttle will reroute to connect with Trimet’s Max Red line with direct access to the Portland Airport for Thanksgiving and Spring Break. Free Trimet passes will be available for students who wish to use this transit option.