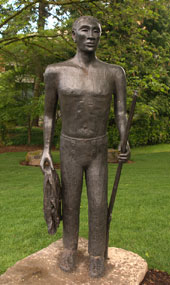 York: Terra Incognita—Lewis & Clark College’s permanent memorial to York—honors a key member of the Corps of Discovery too long ignored by history. Through the display of this powerful sculpture by the artist Alison Saar, Lewis & Clark remembers a man who served on the expedition as the slave of William Clark, who became a crucial contributor to the expedition’s success—and who, after the completion of the journey, shared in none of the fame and fortune enjoyed by other members of the corps.

Dedicated on May 8, 2010, at a prime location near Watzek Library, the York sculpture stands six feet tall and is mounted on an approximately two-foot bronze base. Neither the physique nor facial features of the sculpture claim to represent what York actually looked like. “Because there are no known images of York,” Saar explains, “I felt a realistic portrait would only continue to misrepresent the man.” Partly for this reason, Saar made the sculpture’s back a focal point and a symbol of the burden borne by York during the Lewis and Clark expedition. One of William Clark’s maps is inscribed—“scarred” might be more accurate—on the sculpture’s back and shoulders.

In her proposal to the York Committee, Saar wrote, “I have a personal interest in the recognition of unsung heroes, particularly those who have been overlooked due to their race or gender.” She has previously completed several sculptures addressing this theme.

By funding and commissioning this work by a nationally recognized artist, Lewis & Clark strives to welcome people from minority populations to our campus community and to join the ongoing work to recognize historical figures, like York, who contributed greatly to our country but without acknowledgment or reward.

“The sculpture stands as a visual metaphor for a historic moment that we must regard more thoughtfully if we are to understand American history,” says York Committee Chair Linda Tesner, director of the College’s Ronna and Eric Hoffman Gallery of Contemporary Art.