At Home Abroad by Anne-Sophia Bolon. This was published in The New York Times in April 2002, under The International Herald Tribune’s name. It details Bolon’s TCK background, along with revelations from an A-TCK (Adult Third Culture Kid).

Global and Domestic Nomads or Third Culture Kids: Who are They and What the University Needs to Know by Wendy Stultz. This article offers recommendations to help support and integrate TCKs into their university.

TCKs Come of Age An article regarding the needs of TCKs and summarizes research findings up to this date.

“‘The ache for home lives in all of us,’ writes Maya Angelou, ‘the safe place where we can go as we are and not be questioned.’ For some, whose childhoods were scattered around the world, home is a tapestry of foreign memories. For some, whose answer to Where are you from? is all but straightforward, home has more than one address. For some who call themselves Third Culture Kids (TCKs), the ache for home is constant and insatiable.”

A Snapshot of The Modern Third Culture Kid 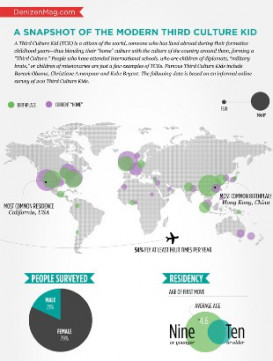 But most interestingly, they have no plans on sticking around. When asked if they would stay in their current city two years from now, seventy percent of respondents said no or not sure. When we asked about five years from now, the number jumped to 92 percent.

And what do they most frequently say when asked “Where are you from?”

Does your Language Shape How You Think?

New research has revealed that when we learn our mother tongue, we do after all acquire certain habits of thought that shape our experience in significant and often surprising ways.”

Lost in Translation: New cognitive research suggests that language profoundly influences the way people see the world; a different sense of blame in Japanese and Spanish

Jon Charnas (class of 2008) writes about how humor can be universal, and how it can define who we are as TCKs.

The Chronicle Magazine Article on TCKs at Lewis & Clark

The Chronicle Magazine for Alumni and Parents featured an article on TCKs at Lewis & Clark!